English Department faculty are engaged in many kinds of research related to Literature and Social Justice. Books by faculty, recently published and in-progress include studies of: 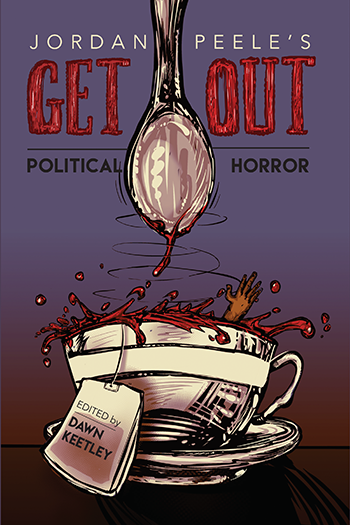 Jordan Peele’s Get Out: Political Horror is a collection of fourteen scholarly essays (including the introduction) devoted to exploring Get Out’s roots in the horror tradition and its complex and timely commentary on 21st-century US race relations. The first section traces the influence of the gothic and horror tradition on Peele’s film, from Shakespeare’s Othello, through the female Gothic and Ira Levin’s Rosemary’s Baby and The Stepford Wives, to the modern horror film, including the zombie, rural, suburban, and body-swap subgenres of horror.  The second section takes up Get Out’s varied political interventions—notably its portrayal of the continuation of slavery and the deformation of the black body and mind in white “progressive” America. In this section, contributors address Peele’s film alongside African American figures such as Nat Turner, W. E. B. Du Bois, and James Baldwin. Taken together, the chapters in this book illuminate how Get Out stands as both a ground-breaking intervention in the horror tradition as well as a devastating unmasking of racism in the contemporary US.
Forthcoming from the New Suns Series at Ohio State University Press in early 2020.
Link to the publisher's website. 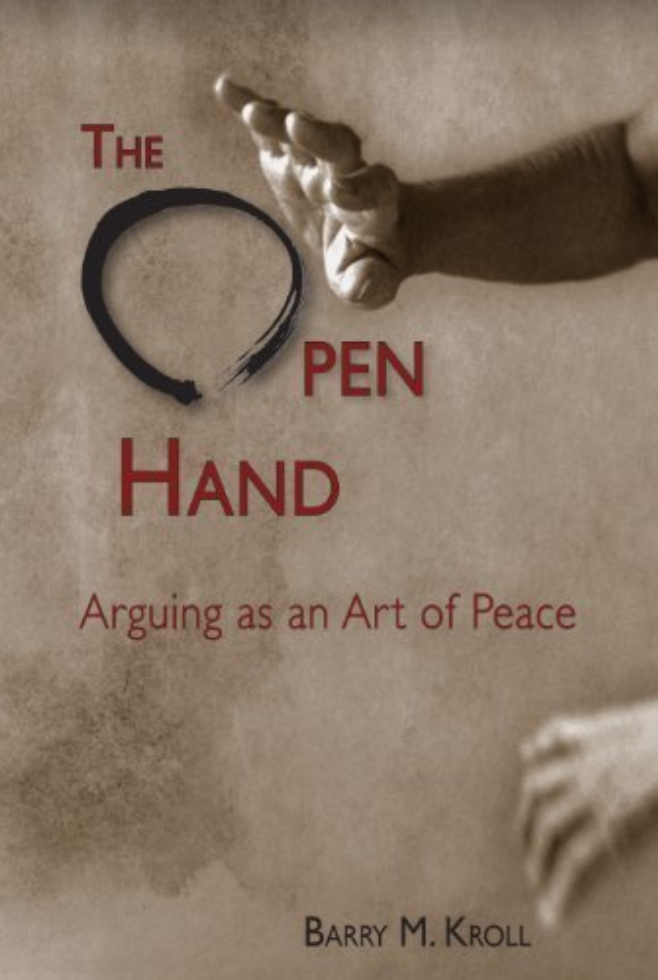 The Open Hand tells the story of a writing course that takes an alternative approach to arguing—an approach that teaches students to engage in conflicts without producing escalation and polarization.  The book discusses a series of activities, assignments, and pedagogical strategies anchored in three modalities of learning—conceptual-procedural, kinesthetic, and contemplative.  Distinctive features of the course are movement exercises derived from the martial arts and mindfulness activities based on contemplative practices.  The course aims to teach students not only how to write thoughtful arguments but also how to deal with conflict in their daily lives. 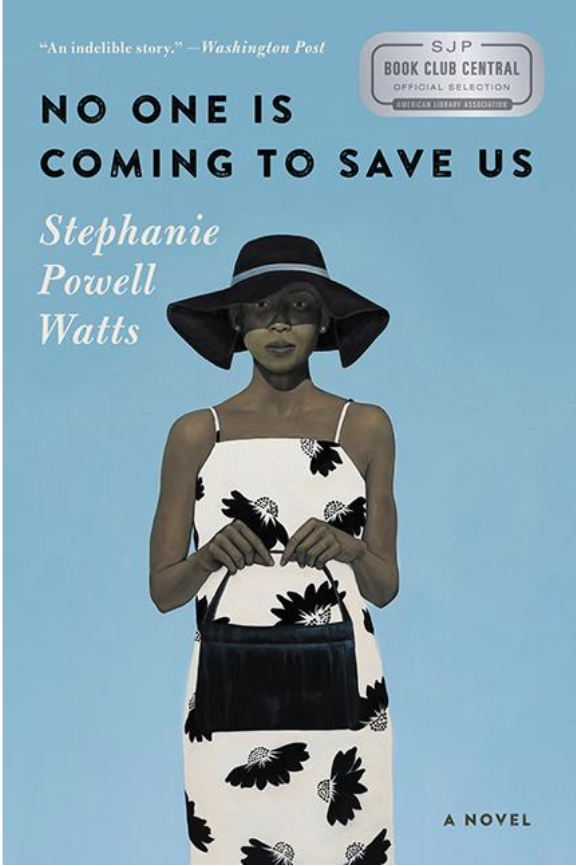 No One is Coming to Save Us is the story of two generations of African American women characters navigating the landscape of a contemporary rural south. These women and the men who love them are haunted by the loss of industry, the persistent ghosts of Jim Crow, and their own private and devastating personal losses. The novel has been called a reboot of The Great Gatsby since in both narratives the signature event is the return of a native son. No One is Coming to Save Us, however is focused on the lives of the women who are the representatives of the many African Americans who did not migrate north and tried to grow a life of dignity and meaning in their home soil. No One is Coming to Save Us is the inaugural book club central selection of the American Library Association chosen by Sarah Jessica Parker. The novel was also honored with an NAACP Image Award in 2018. 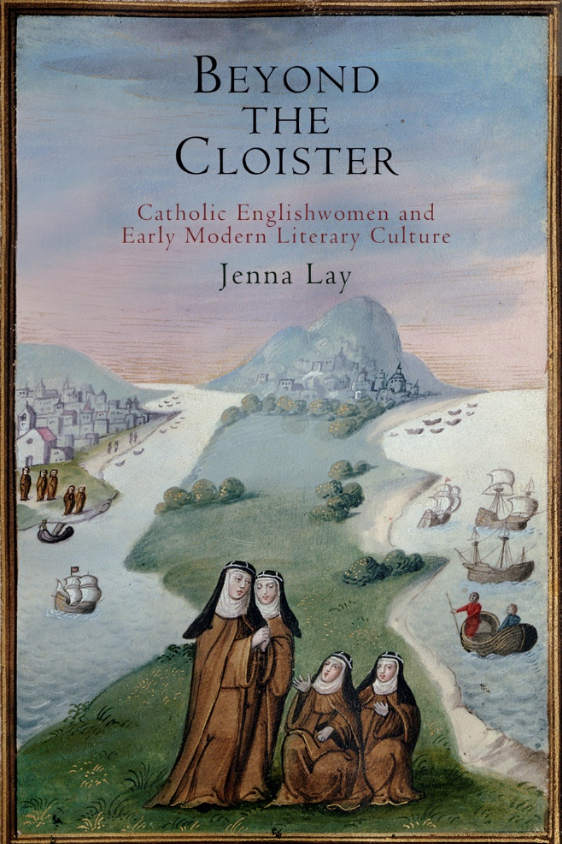 Beyond the Cloister demonstrates that nuns and recusant women, whom we might imagine as marginal figures because of their gender and religion, are centrally important to an enriched understanding of how literature works in the early modern period and how our own critical perspective has been shaped by the texts at the heart of our canon and by a limited understanding of the more expansive literary history that those texts have rendered illegible. The revelatory works of nuns and recusant women were both thematically and formally engaged with the central literary, religious, and political issues of their period. Through their use of tropes, figures, generic patterns, and poetic forms, Catholic women produced politically incendiary and rhetorically powerful lyrics, prayers, polemics, and hagiographical lives. By exploring these rich texts not only for their historical significance but for their literary ambitions, my book offers a reassessment of crucial decades in the development of English literary history and of the texts and authors who helped shape our contemporary canon--and thus suggests the importance of literature to understanding and centering historically marginalized communities. 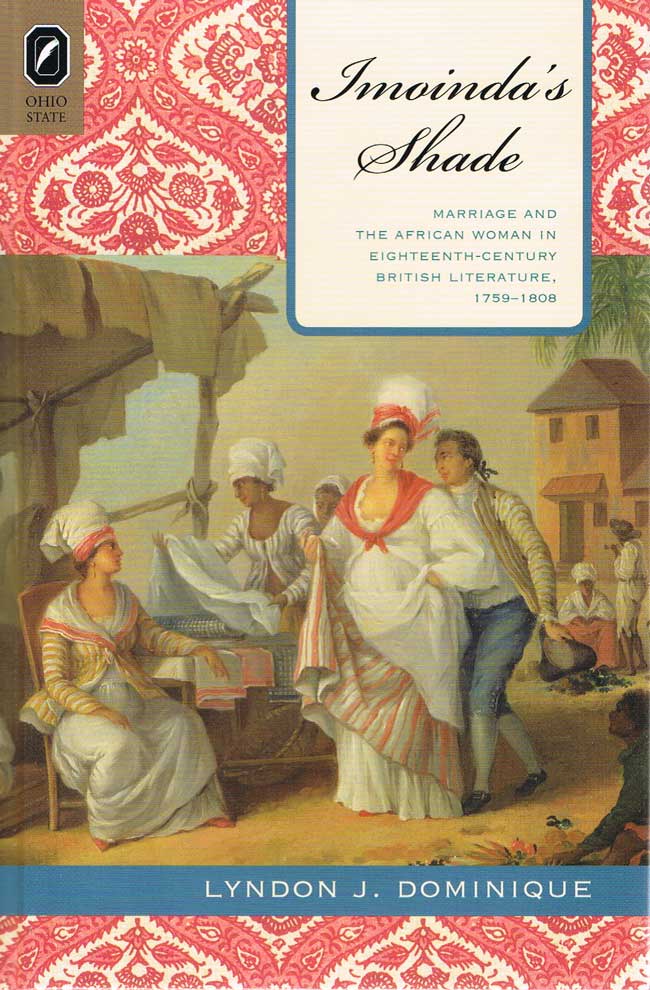 Imoinda, the fictional phenomenon initially conceived by Aphra Behn and subsequently popularized by Thomas Southerne, has an influence that extends well beyond the Oroonoko novella (1688) and drama (1696) that established her as a formidable presence during the late Restoration period. Imoinda’s Shade examines the ways in which British writers utilize this popular African female figure in 18th century fiction and drama to foreground the African woman’s concerns and interests as well as those of British nation grappling with the problems of slavery and abolition in the half century before the abolition of the British slave trade. 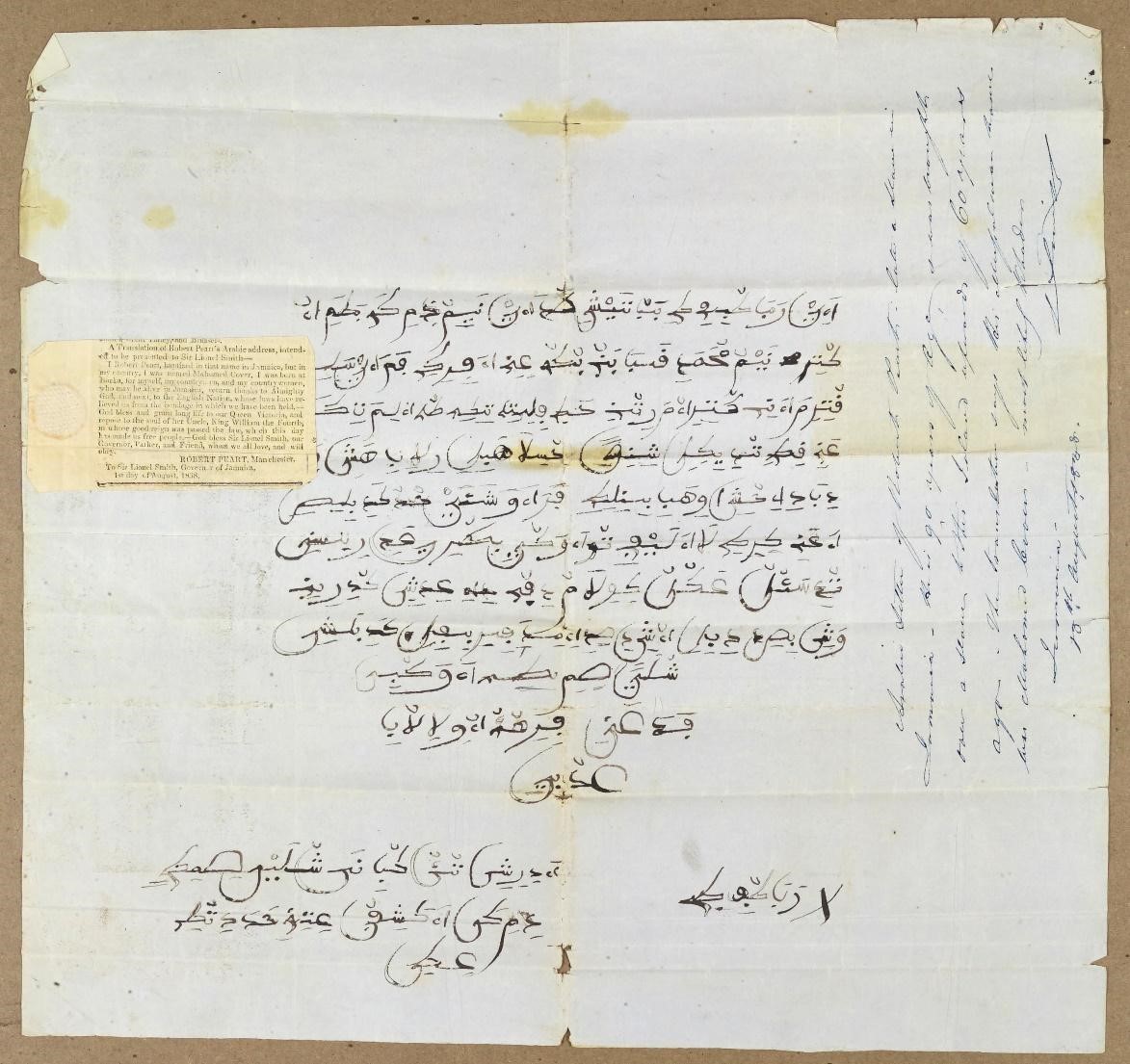 Conducting archival research at the Public Record Office of Northern Ireland, Beth Dolan found this remarkable Arabic address written by a 90-year old former enslaved man in Jamaica in the occasion of emancipation in 1838. Dolan collaborated with Arabic Studies scholar Ahmed Idrissi Alami to translate and analyze the piece in the forthcoming article: "Muhammad Kaba Saghanughu's Arabic Address on the Occassion of Emancipation in Jamaica," William and Mary Quarterly, 76.2 (2019). 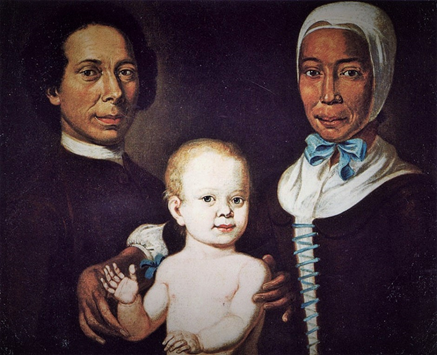 In "Enslaved in the City on a Hill: The Archive of Moravian Slavery and the Practical Past,”  Seth Moglen explores the memoirs left behind by the literate, enslaved Africans who helped to found the city of Bethlehem, Pennsylvania in the middle of the 18th century.  The article includes excerpts from his book-in-progress, “Bethlehem: American Utopia, American Tragedy”  -- an experimental work of Public Humanities scholarship, which employs modernist literary techniques in order to explore the egalitarian aspirations and structures of domination that have shaped the city of Bethlehem over the course of three centuries.

I am currently co-writing an essay with Emily Shreve, a Lehigh English Ph.D. alumna, entitled "Collaborative Ethics: Practicing Engagement in our Academic Communities" for Mission Driven: Reimagining Graduate Education for a Thriving Humanities Ecosystem (MLA Publications). We advocate for a new doctoral ethics of community and collaboration, one that creates opportunities for humanities Ph.D.s to engage more thoroughly and professionally with multiple publics. Our essay builds on Lauren Berlant’s conception of professionalism as “an explicit pedagogical/collegial ethics,” an approach that demands robust collaboration “in discussion and across publics” (“Affect is the New Trauma” 135, 132). We suggest that intra-university partnerships and programs offer a necessary first step in developing this pedagogical/collegial ethics and negotiating the public-academic divide, and we offer examples of collaborative opportunities that allow humanities graduate students to work with general education students, student affairs colleagues, and humanities and non-humanities professionals within and beyond the university. Drawing on our own collaborations—as colleagues working across institutions and across student/academic affairs; as dissertation advisor and advisee; as director of graduate studies and graduate student—we demonstrate how this sociable reorientation allows humanities graduate students to acculturate themselves to the broader university community; to develop skills and capacities relevant to a range of future positions; and to practice habits of professionalism that enable ethical engagement with multiple communities. In doing so, we seek to resist a market-based professionalism that reinforces the current inequities of the academic labor market and instead propose a horizontal ethics that responds to our current structural and systemic challenges with professional optimism and intellectual 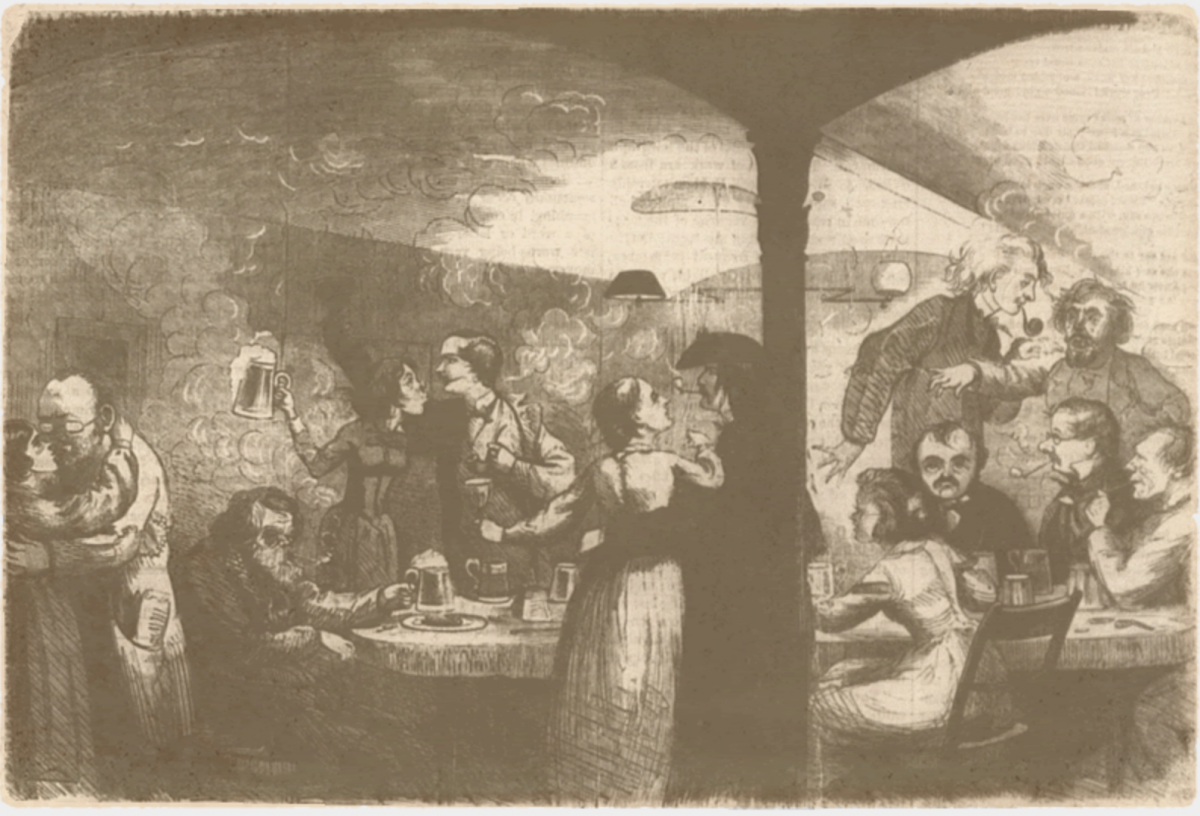 The Vault at Pfaff's is a digital archive of art and literature by the bohemians of antebellum New York. It began in 2004 as a collaborative, interdisciplinary project between Edward Whitley (English Department) and Robert Weidman (Digital Library Technical Coordinator) to tell the story of the first group of American writers to identify as literary bohemians. Central to the goals of the project was an effort to better understand how this group affected the life and career of Walt Whitman, who met with the bohemians on a nightly basis between 1858 and 1862. While many of the bohemians were advocates for women's rights (such as Ada Clare and Elizabeth Barstow Stoddard) and economic justice (such as Stephen Pearl Andrews and Edward Howland), they also financed their activities with funds from cotton plantations in the U.S. South. Ada Clare used the inheritance from her family's plantation to buy the uptown brownstone that served as the bohemians' literary salon, and Edward Howland similarly invested plantation earnings into the bohemians' literary weekly, The New York Saturday Press--the original publication venue for Whitman's seminal poem, "Out of the Cradle Endlessly Rocking." Discovering that the stolen labor of African American slaves underwrote the activities of this group of writers and activists has both complicated and enriched our sense of how to work with literature from within a context of social justice.